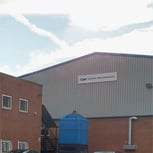 Central Wire Industries embraces new opportunities and advancements that make us a well-rounded specialty alloy wire supplier meeting the needs of a variety of industries. While we continue to look forward we haven’t forgotten our industrial roots and are proud to have a connection to them with CWI UK, our plant in Rotherham, a stone’s throw from Sheffield. CWI acquired Hempel Wire Industries Rotherham, UK facility in 2015, which added new IP, shaped profile wire, and other products.Sheffield was often called Steel City and was once the undisputed metalworking capital of the world. It has been known for its cutlery production for nearly 800 years, but it became one of the world’s industrial capitals in the 1700s when new techniques were developed there that revolutionized the steel industry.

First was the crucible steel process, the first method of casting steel bars, producing a tougher, steel that had consistent, reliable quality. It also could be produced in larger quantities. Benjamin Huntsman’s technique led Sheffield from producing 200 tons of steel a year to 20,000 tons.

Soon after Thomas Boulsover, a cutlery maker created a silver plate. He happened upon temperature for fusing silver and copper and found them compatible for manipulation. This faux silver was obviously cheaper and became popular, allowing the working class to showcase their own silver teapots, candlesticks, and cutlery.

More than 100 years later Sheffield would again be at the center of a steel-industry revolution when Henry Bessemer perfected a special furnace to super-heat iron and refine the metal to steel. The process lowered the production cost of steel and thus increased an industrializing world’s ability to acquire and use it.

Maintaining its reputation as a place for innovation, the formula and process for making stainless steel were developed by Harry Brearley in the steelmaking labs of Sheffield in the early 1900s.

Brearley ran into considerable resistance when trying to sell the steel that rusted and stained less. It was as if only he could see its potential value. He said: “The range of the mind’s eye is restricted by the skill of the hand. The castles in the air must conform to the possibilities of material things—border-line possibilities perhaps; or, if something beyond the known border is required, the plan must wait until other dreams come true.”

Eventually, his persistence paid off. Where other low-carbon chromium-iron alloys didn’t take off, Brearley teamed with his cutlery-making friends to prove what he had immediately thought—this rust-resistant steel would be brilliant for knives. It would eventually find other uses—anywhere that corrosion would be an issue, including power generation, oil and gas, construction and food production industries.

Brearley is known as the Father of Modern Metal, and we think of him as our forefather and Sheffield as our ancestral home. From that beginning CWI now produces more than 40 grades of stainless steel wire, used for everything from fine jewelry to aerospace components. Bessemer, Brearley and the others would be proud. This legacy of innovation has allowed Central Wire to become the well-rounded specialty alloy wire supplier we are today. Visit centralwire.co.uk/ for more information.